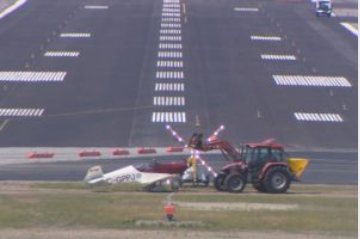 According to a reliable source at the Airport, Runway 23 was closed for a couple of hours during the emergency response, resulting in the cancellation of two departing flights.

Saint John fire crews were called to the scene at 9:50 a.m., said platoon chief Mike Carr.  They found the private plane with only the Pilot who happens to be the only person on that plane. From the look of things when the Team found him, he was still conscious but was taken to the Hospital.

Two flights, one from Toronto and one from Montreal, were also diverted from landing at the Saint John airport.

According to Greg Hierlihy, the airport’s director of finance and administration, the plane was taking off at the time of the crash. He also went further to point out that everything is now under control as the Transportation Safety Board has been informed about the accident and been sent pictures. The board is now determining how to investigate the incident.

Although Customers at the Airport were not much bothered as most of them were just returning from Vacations and their Family is there as well. Some that came around to pick up their beloved ones were told that their flight was diverted to Fredericton due to the incident. Travel plans were interrupted for many.

Saint John Airport is a Canadian airport located 8 nautical miles east northeast of the central business district of Saint John, New Brunswick, Canada. The airport is wholly within the boundaries of the City of Saint John.