Air France Takes Delivery Of Its First Airbus A350-900 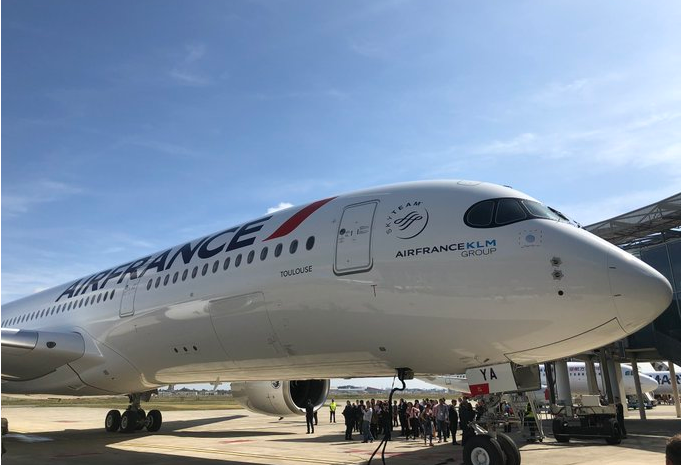 Air France today, joined the league of A350 Operators as the France National Carrier, received its first A350-900 at an event in Toulouse this morning.

The A350-900, registered F-HTYA, is the first of 28 on order for the carrier. The aircraft will begin service on the 7th October, flying to Abidjan and Mali. This marked the 71st Airbus A350 delivered by Airbus from Toulouse In 2019.

This is the first of 28 A350-900s on order for Air France, a number which received a boost after KLM’s A350 orders were transferred to the airline earlier this year.

After Air Caraibes and French Bee, Air France became the third French airline to take delivery of AIRBUS A350 XWB which has been christened “Toulouse” as Air France doesn’t tend to name its aircraft. The first Air France A350 registered F-HTYA, has been delivered at a ceremony in Toulouse.

The Trending Video on Twitter this morning, and flight to Charles de Gaulle airport happened today. Present at the ceremony were numerous Air France executives, including Ben Smith and Anne Rigali. Christian Scherer, CCO of Airbus, was also at the event.

“This [aircraft] forms a foundation for our future standardized and more streamlined fleet. Obviously, we are focusing heavily on economic performance in these very tough times we operate in and the environmental performance of this aircraft is second to none. The simplification of our fleet is key and this airplane can fly to any of our long-haul routes, all the way to Santiago and Singapore, our two longest routes.”

Expectations from the New Air France A350-900

The new product marked the beginning of an Improvement in Air France premium offering as the A350 for Air France has been arranged with a total of 324 seats, including 34 business class and 24 premium economy. The business class cabin has had a complete redesign, employing the Zodiac Optima seat from Safran.

The cabin arrangement has a striking resemblance with Virgin as the cabin is arranged in a 1-2-1 configuration, giving that all-important direct aisle access to every passenger. Also, the screens in business class will be huge, at 18.5”, and powered by Safran’s RAVE IFE.

The economy and premium economy cabins are the same found on other long-haul aircraft. In premium, that’s a 2-4-2 arrangement and in the economy a 3-3-3 layout.

All passengers will have access to WiFi via Air France CONNECT, which offers a free messaging only connection, then two paid connections which vary in price depending on the length of the flight.

Just in a couple of days, Air France will operate the first commercial flights with the A350-900 on 7 October to Abidjan in the Ivory Coast and Bamako in Mali.  Air France chief executive Anne Rigail says flights to Toronto will then follow from 27 October, and once the third aircraft is delivered, A350s will be deployed on Cairo and Seoul services from 7 December. Air France has also earmarked the type to serve its Bangkok route from next summer.

The A350 Is Totally A Replacement on Existing Routes

The National Carrier largely sees using the A350-900 as a replacement type on existing routes rather than opening additional destinations. “Air France with its long history of international operations already serves all the major destinations around the world.

There are one or two that are beyond the range of today’s technology that perhaps in future we may look at. But that’s not our priority. This plane is to fly all of our major routes in a much more efficient way and also perhaps gives us the opportunity to add additional frequencies.”